The top 10 lowest calorie beers have changed significantly over the past few years, and I really think this has a lot to do with the explosion of low calorie seltzer drinks, specifically White Claw which seems to have started this craze of calorie 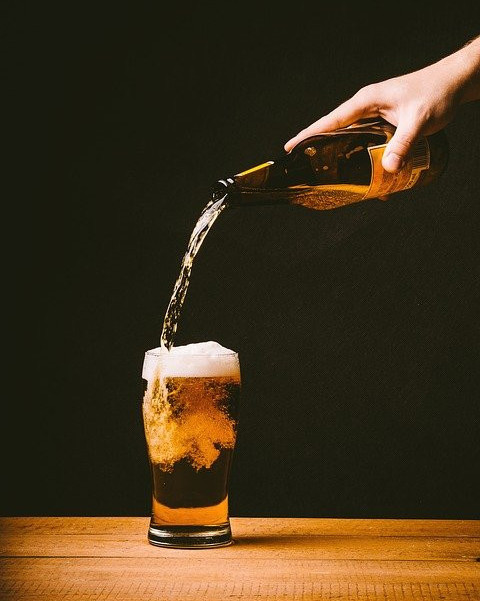 conscious drinkers, including myself. Every beer listed below is under 100 calories.

So, whereas this list once upon a time would have been made up of the familiar old beers like Miller Lite, Michelob Ultra, Coors Light, and Bud Light, we’re living in a time when even Blue Moon, Lagunitas, & Goose Island now sell some incredibly tasty low calorie beers.

I live in Chicago and people party hard in my neighborhood. I’ve been noticing the premium low calorie beers sell out at the local grocery stores incredibly quickly, and for good reason. They’re awesome.

So, below is a list of 10 low beers I’ve compiled from well researched data, as well from my own experience. Every one of these below is under 100 calories.

So, without further ado, here are the top 10 lowest calorie beers starting with the lowest of all (but not necessarily the best).

This is definitely not my favorite beer, but I’ve listed this first because it’s about as low in calories as you can get in a beer, while still being able to enjoy a drink and get a buzz. So, if you wanna go crazy low calorie, this is an option for you.

My best friend who lost 25 pounds in just a few months resorted to this beer. What’s funny is he always told me Miller Lite tastes like water, yet now his fridge has two cases of this in it at all times now. He says it’s way better than Budweiser 55, which I’m not even listing in this article, cause I tried that once, and it was practically water.

The good thing about Miller 64, and I can attest to this, cause I’ve had this beer multiple times, is that you can still get a buzz drinking a few of these, or at least I can. Maybe I’m a lightweight. But when I bought Budweiser 55, I didn’t feel a thing, and it went flat almost right away. 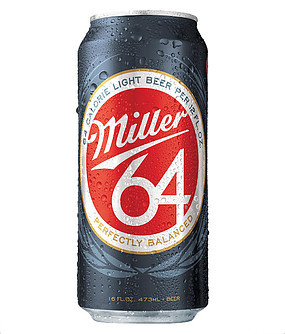 It’s triple filtered and brewed without any artificial colors or flavors. If you want a refreshing beer, this is a great choice, but if you want something a bit more full-bodied, you may want to check out the other beers on this list. 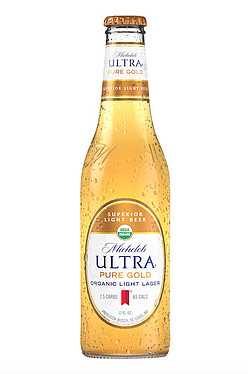 Corona Premier has only 90 calories per bottle. A traditional corona has 148 calories. Don’t get this beer confused with Corona Light, which has 99 calories. Corona Premier also advertises itself as a low carb alternative with only 2.6 grams of carbs.

This is the first beer they’ve launched in 29 years. I was actually buying this regularly for a while, as I loved the fact that it was a great low calorie alternative to Miller Lite, plus it just tasted way better.

It’s a crisp, smooth, and refreshing beer that with a great flavor that retains Corona’s original flavor. It’s a fantastic summer beer that keeps the calories low.

I still buy this from time to time, but because there are so many other premium light beers available now, I switch things up more often, just cause I can. 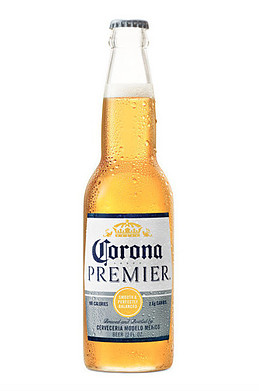 Here’s a refreshingly smooth lager that has only 92 calories, while still giving you 4% ABV per bottle. It’s got the same character and premium taste as Labatt Blue, but without the added calories.

It has a nice balance to it. It’s not an overpowering brew, while being refreshing and flavorful. Plus you’re saving yourself a ton of calories from an original Labatt Blue, which has 153 per bottle. 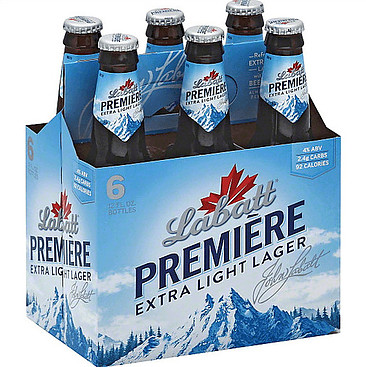 When I found out that this existed, I did cartwheels all around the block, then I jumped in my car and drove to Binny’s to get a 12 pack for myself. Shortly after heading to Binny’s, they started selling this at all my local grocery stores too. I guess it just became incredibly popular very quickly, at least where I live.

It’s a tangerine beer and it’s wonderfully balanced and crisp, with hints of tropical flavors added in.

Blue Moon has always been my favorite beer. I just very rarely drink it cause the calorie content is so incredibly high. You drink one Blue Moon, and you’re taking in 170 calories. If you drink 2 Blue Moon Light Skies, you’re taking in just a few more calories than that, and you get to enjoy more beer.

To me, this beer tastes fantastic. I always drink it with an orange slice, as I do with a regular Blue Moon. I don’t think you’re allowed to drink a Blue Moon without an orange slice! Just sayin’. 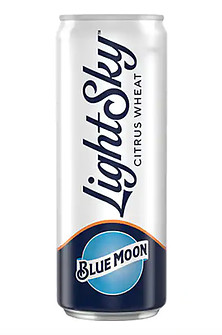 I’d never even heard of this beer, but I saw it at my local Walgreens, and noticed it only had 95 calories with an alcohol content of 4.2%, so I impulsively bought it. Plus, the packaging was really nice, and immediately thought to myself that it looks like a really nice premium beer.

The taste was fantastic and full-bodied. Compared to many other light beers, I felt like this one had a much stronger flavor. Many people who review light beers consider this to be one of their favorites.

Amstel Light has been around forever. It’s always had 95 calories, and it’s deliciously unique. It has an earthy rich flavor all the way from Amsterdam, you can find this in almost any grocery store. It’s been a staple like Miller Lite or Bud Light, but it’s always been a step above the mainstream light beers.

It has a clean and rich flavor, and a golden yellow color to it. It’s refreshingly light, with plenty of fruity aromas. 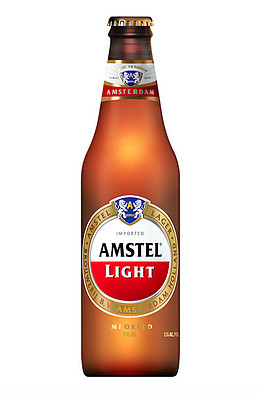 This was one of the first premium light beers I discovered, and I was so surprised that it existed. Of course I had to buy it. I mean it’s a Chicago beer! It’s one of those moments when your jaw drops. I thought to myself, “wait a second! I thought the only light beers out there were Miller Lite, Bud Light, and Coors Light”.

Of course, I knew there were others out there too, but I never thought Goose Island would make one. One day, it just showed up at my local grocery store when I was about to grab a case of Miller Lite, so I decided to buy this instead.

It’s a full-bodied IPA with a balanced bitter flavor filled with citrus aromas. It’s another beer that doesn’t make you feel like you’re drinking a low calorie beverage, but you are. It’s only got 98 calories per can. 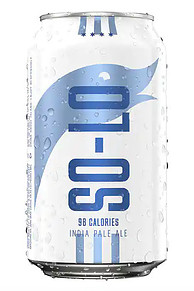 Soon after I discovered Goose Island’s So-Lo beer, this one popped up at grocery stores too. It’s a creamy bodied beer with a well-balanced bitterness, with piney light citrus aromas. 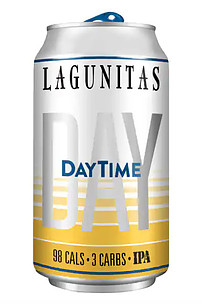 At just almost 100 calories, I put this on the list because it’s a wonderful beer with a full and refreshing flavor. Many folks who are a fan of regular Heineken beer are surprised by the full-bodied taste of this.

It’s a crisp and refreshing beer that many people claim to be the best imported light beer that they’ve tasted. 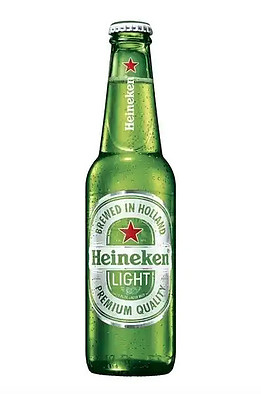 Get Any Of These Beers Delivered To Your Door In Under 60 Minutes
Enter Code DRIZLYDEAL For $5 Off Your First Order.
Click Here To Get Started!

Which Low Cal Beer Is For You?

There are many other low calorie beers out there, but these made the list from a combination of research I did as well as my own experience with the majority of these. 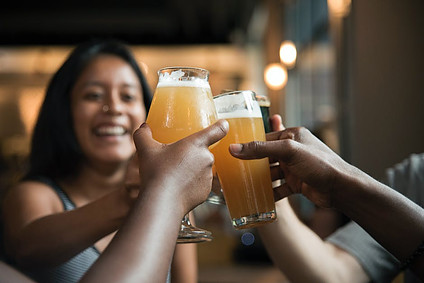 If your goal is to find the top 10 lowest calorie beers under 100 calories, then I’m hoping this article helped point you in the right direction. My goal in writing this was to list out as many beers as I could that I felt also weren’t so conventionally known as light beers.

That’s why you didn’t see Miller Lite or Coors light listed above.

If you don’t have access to these beers in your own supermarket, head over to Drizly.com.  They deliver alochol in under 60 minutes.  Head to the site to find out if they deliver in your area.  Enter code DRIZLYDEAL for $5 off your first purchase.

Thank you for reading, and if you have any suggestions for other low calorie beers, please let me know in the comments below. I’d love to learn more about what else is out there. If you have any questions or need clarification on anything, let me know and I’ll get back to you as soon as possible. Thanks so much for reading.