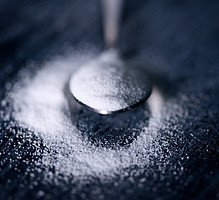 There are many brands of these sugar substitutes, and the ones listed below can be used cup for cup as a replacement for sugar. However, if you want a more purified version of these products, you can find them easily.

But know that the more purified versions of these are much more likely to have unpleasant aftertastes, as 2 of these products below in their purest forms are MUCH sweeter than sugar.

Please note, this post contains affiliate links & I may earn a small commission when you click on the links at no additional cost to you.   As an Amazon affiliate, I earn from qualifying purchases. 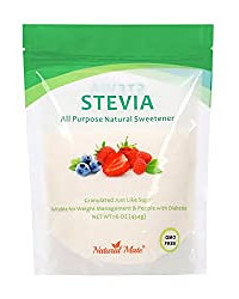 Stevia is one of the most widely known natural sugar substitutes that has taken over the health food industry for years now. It’s known for being a healthy and safe sugar substitute without any of the negative side effects of real sugar. It has zero calories.

Now, although it has no calories, it also is 200 times sweeter than sugar alone. This is also why several companies make Stevia blends, which makes the final product more processed.

If you want the least processed version, then green leaf Stevia is the way to go, as it has been made from Stevia leaves that have been dried and ground.

I’ve been using Stevia in my coffee and to sweeten certain foods and fruits for years, and I personally like it a lot, but I know some people who feel its taste is too bitter.

A side note I just wanted to mention, cause this was a very interesting experience! This past summer, I got a chance to taste pure Stevia that was actually grown in a garden, and you can definitely taste a difference and the bitterness of it comes through and is very potent.

Monk Fruit is an all-natural zero-calorie sugar substitute and I have a few friends that swear by it. These same friends 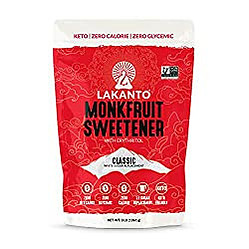 refuse to use Stevia because they can’t stand the aftertaste of it. In its purest form, Monk Fruit is 300 times sweeter than sugar.

I’ve personally used Monk Fruit and Stevia for coffee, cereal, and baking. I don’t have a preference as far as flavor goes, but I do like the additional health benefits that Monk Fruit has, such as cancer prevention, weight loss, diabetes, and much more.

It’s a sugar-free fruit, which has been known as the longevity fruit in Southern China. It was first discovered by Buddhist monks in the 13th century. That’s why it’s got such an unusual name.

Whereas Stevia has been known to have a bitter aftertaste, Monk Fruit has been reported to have a slightly fruity taste. There are no negative side effects known with Monk Fruit.

You can use Monk Fruit in coffee, cereals, cookies, desserts, and much more.

Visit this link to see Amazon’s choice of Monk Fruit.

It’s a perfect 1 to 1 cup replacement for cane sugar. It can be used as a direct replacment in any recipe that calls for sugar, all while having zero calories. 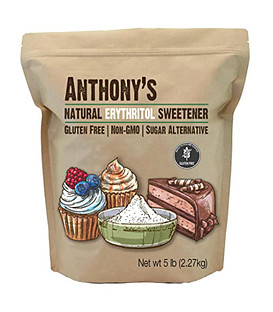 pantry. I kept asking him why his coffee tasted so amazing, and as it turns out, he was using this in his coffee.

Erythritol has all the amazing qualities about it that make you love sugar, but it doesn’t have negative side effects. It belongs to the class of sugar alcohols but is different from others, such as regular sugar or xylitol. It only contains 6% of the calories that you’d find in an equal amount of sugar.

There are no serious side effects known to be associated with Erythritol. It’s known to have an extremely high safety profile. In fact, it may even reduce the risk of heart disease as studies have been conducted regarding this.

Many people resort to Stevia or honey to sweeten their foods. However, honey has calories, and stevia is known to many to have a bitter aftertaste. Erythritol seems to be a wonderful balance.

As it turns out, the exact Erythritol brand that my roommate is using also happens to be Amazon’s choice.

Unlike the Monk Fruit and Stevia listed above, the only ingredient in this product is Erythritol. More than likely, after my Stevia runs out, I’m going to start using this, because it’s hands down the best tasting sugar alternative with zero calories that I’ve tried.

It just tastes like sugar, and it’s pretty mind-blowing that it has no calories. 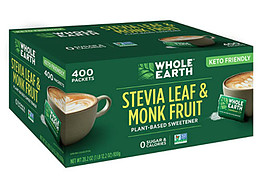 Now, if you don’t want to go the Stevia route or the Monk Fruit route alone, you can always get a mix, like this Stevia & Monk Fruit combination sweetener.

This is a good option for anyone who wants a nice in-between taste. Many people who don’t like the taste of Stevia by itself tend to really like this combination, because there seems to be almost no aftertaste, according to customers.

I haven’t personally tried this combination or brand, but it’s Amazon’s choice of a Stevia & Monk fruit sweetener. It has some of the best reviews I’ve seen for a sugar substitute product also.

Which Sweetener Is The Best?

So which of these is the best all-natural sugar substitute? My personal choice is Erythritol. I think it may be for a few reasons, but mainly because it’s the only one on this list that tasted identical to sugar. It’s not just that it tastes just like sugar, but its consistency feels like sugar too.

It’s also the only item on this list that has a single ingredient…Erythritol. The other products listed add erythritol to them, which makes sense, because otherwise, they’d be way too sweet. Remember, that Stevia alone is 200 times sweeter than sugar while Monk Fruit is 300 times sweeter.

I like the idea of using a product with a single ingredient which is another reason I’d go for the Erythritol, but I’m also fine using both Stevia and Monk Fruit, which I’ve used for years. 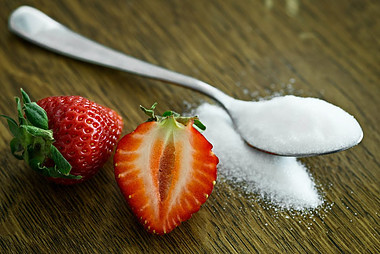 I feel that both those sweeteners are great in my drinks and foods. However, when I tasted my roommate’s coffee, I was seriously shocked when I found out he was using Erythritol. I am likely going to be making that switch as soon as my Stevia runs out.

So, I guess this really boils down to preference. Luckily you can check out the products on Amazon and look carefully at the reviews so you can make a more educated decision.

I hope this list was helpful and informative. If there are any questions I didn’t answer, please let me know in the comments below and I’ll make sure to get back to you as soon as possible. Also, if you use any other natural sweeteners that aren’t listed here, I’d love to know what they are. Thanks so much for reading.